The Metamorphosis of a Story: on writing my essay “Teaching my daughter that love is love” in today’s Washington Post

It was early morning when I saw it. My daughter had just left to school. My fiancé was long gone. Her electrical forewoman life requires that she’s out of the house before 6am. I was sipping my coffee, scrolling through the news and social media, getting ready for a morning of writing before heading to teach my high school students. Then I saw it: Parents Magazine had just released their February issue, featuring a same sex couple on the cover, and conservatives were losing their shit.

I remembered the moment in 5th grade when I realized in a homophobic moment that I was being raised in a lesbian relationship. The homophobia continued throughout my childhood and I internalized that shame.

I’m now raising my fourteen year old daughter with my butch partner whom I am marrying this spring. I love our family. I love how we love in resistance to what conservatives say about us, because love is love is love is love.

It means the world to me to see the model of love I have known since childhood finally acknowledged on the cover of a parenting magazine. I had to write about this. I went in.

I abandoned my coffee and wrote sitting on my couch; I pulled it up on the bus commuting to work; and kept at it into the night after getting home; I revised in the wee hours of the morning when the story wouldn’t let me sleep. I felt it bubbling in my body. I felt the love I have for my family and the shame that’s been imposed on me both as a queer woman in a lesbian relationship and as a woman raised by women in a lesbian relationship. I worried about my daughter, this world she’s living in that’s still telling our children their families aren’t normal, are sinful, and shouldn’t be normalized.

The essay that came out of this “Teaching my daughter that love is love” (formerly Loving Women, Loving Mothers) just dropped on The Washington Post website this morning. 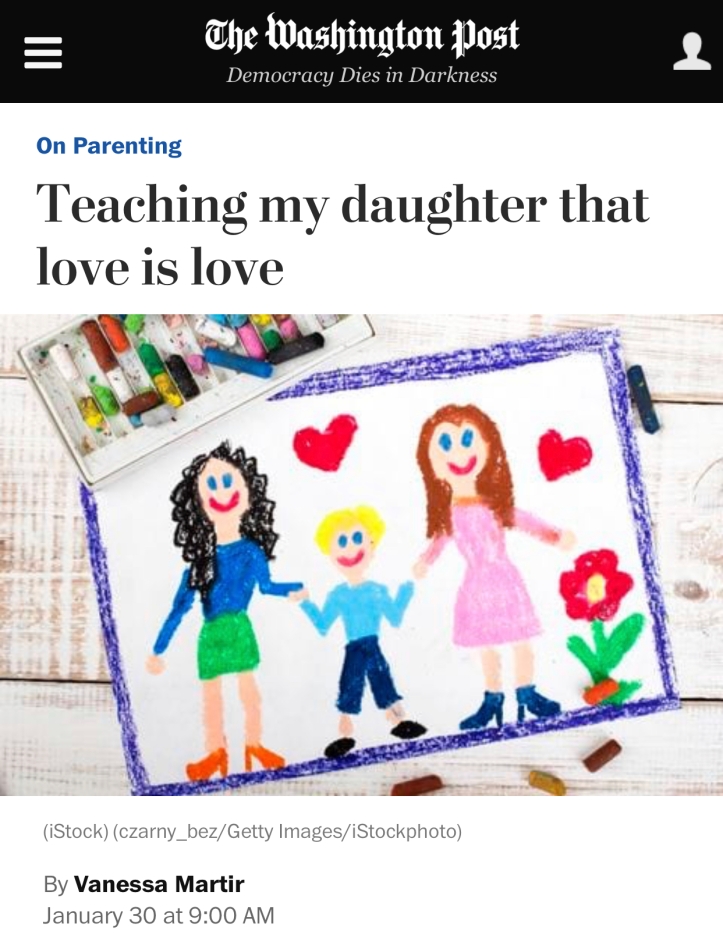 The truth is I’ve been writing versions of this essay for years. It’s been simmering in me for so long, and when I saw the Parents Magazine story, something in me shook and the cauldron started bubbling, coalescing the stories of my childhood with my present stories–this life I’ve created for myself where I am in the most loving and supportive relationship I’ve ever known, raising a daughter I am proud of every single day.

When it was done with the essay, I knew I had to send it somewhere it would get a lot of eyes. This wasn’t about my ego. It still isn’t though, yes, it’s huge that I have an essay in one of the top papers in the country.

It was about the story, how important it is, how our stories countering the conservative narrative should also make big headlines. I made a list. I reached out to other writers for suggestions. I settled on The Washington Post and I sent it. Within hours, it had been accepted. It went live this morning.

I didn’t know that the day before it would go live, a hate crime would hit headlines: the attack on Jussie Smollett of Empire.