Addiction and the ghosts we carry

This morning I learned of the acceptance of a panel I was invited to be on at AWP 2018 in Tampa. The panel is titled Destruction and Creation: Addiction, Recovery, and Writing with Melissa Febos, Terese Mailhot, and Rob Roberge, moderated by Kelly Thompson

Panel description: The addiction story, though centuries old, is a breaking one. Five authors who write from the edges present perspectives and offer their approaches, both practical and emotional, to writing about addiction and recovery and the role addiction plays in their creative lives. The addiction myth operates in profound ways both historically and presently in the lives of writers. How do vocation and addiction intersect? How do we write in and through addiction spaces, images, and narratives?

I am thinking of my brother, Juan Carlos. When he died, after his fifteen year struggle with heroin addiction, I became obsessed with learning about addiction. I wanted to know why. I wanted to understand him–why he snorted it that first time; why he picked up that needle. I wanted to dig into why it is/was that I have been able to make something beautiful out of these ghosts that haunt me while he was taken out by his.

What happened to you, Superman?

In my research, I came upon these lines in an article that have stayed with me:

“If you know someone who’s using or has used, you should know that this isn’t as simple as them making bad decisions. They’re running from something that, to them, seems a whole lot scarier than a needle.”

I thought of this recently when someone told me that we have to stop treating addicts as victims. That kind of thinking isn’t just problematic, it’s simplistic and dismissive. We can hold people accountable for their behavior while also understanding that they are wounded and can’t deal with these wounds. “They’re running from something that, to them, seems a whole lot scarier than a needle.” Or that bottle of scotch. Or that crack pipe.

When I first noticed the sore on Carlos’s hand, it was just above his wrist, in the meaty part where his thumb and his index finger met. I knew he used heroin, he’d been doing it for years, had been in and out of rehab, but he always said he couldn’t shoot up. “It scares me,” he said.

I grabbed his hand when he reached for the cigarette I was passing him. “What’s that?” I searched his face, for what I don’t know. Guilt, maybe.

“Nothing. I cut myself.” He snatched his hand away.

“You cut yourself?” I stared at him with disbelief. I couldn’t believe he thought I was that stupid. Or that gullible. “Are you fuckin’ kidding me?”

“Ay Vanessa, please.” My brother only called me by my name when he was annoyed or just wanted me to shut the fuck up. When I heard later that he had to get it stitched shut, he didn’t answer my calls for days. When we finally spoke, I didn’t mention it. I didn’t have to. He knew I knew and I knew he was ashamed. It was an unspoken thing between us—he showed me his shame and I didn’t rub it in his face.

One time, when Carlos was living with me back in 2002, we were sitting in my room watching television. He was nodding out and when he caught me staring, he said, “It’s the methadone, sis, I swear.” I knew better but I didn’t push.

Later, out of nowhere, he said, “You know, sometimes when I’m high, I can see mom getting raped. I see it, sis. I see it happening.”

I didn’t say anything. I was too blown away by his audacity. I thought he was coming up with another excuse for his addiction, another rationalization, and I was pissed at him for using mom’s rape as a crutch. I was so wrong. My brother was showing me the depth of his pain. He was trying to show me how fucked up he really was by this cuco, the ghost that haunted him relentlessly. I didn’t really understand until just before he died.

My childhood friend Ulysses lost his mother to the crack epidemic that scourged our neighborhoods in the 80s and 90s. Maritza became the neighborhood crackhead. Back then, we all had a neighborhood crackhead. She was different when she was high. Once, she balanced herself on the top of a fire hydrant, laughing and marveling at herself, she looked like something straight out of a circus act.

But when she was sober, a dark cloud came over her. She would sometimes call to me and lower her bag on a rope from her second floor window where she put change so I could go get her the Weekly World News from the newsstand up the block. She paid me by giving me the old ones she’d already read. I’d run to the backyard and scurry up my plum tree to read them. Stories about aliens and a bat child found in a cave and how Elvis was alive and living in a monastery in India. It was in that tree that I became a writer. Maritza was part of the journey.

Is that what I had that my brother didn’t have: writing? A way of processing and being with these ghosts. A way of digging into them and thus freeing myself from their chokehold, poco a poco, día a día.

My brother found out that he was conceived in a rape when he was just 13 years old. There are several stories around how he found out. My mother says it was Millie, her partner, who told him. She’s built a whole narrative around it. She’s cried to me, “Why did she tell my son?”

My brother told me it was my mother who told him. Which story is true, I can’t say. What I can say is that my brother didn’t receive the support he needed. No therapy. No discussion. He was told this story about his conception and was supposed to, expected to live with it. Forced to live with it. This is the story that haunted him. This is the thing that was scarier than that fuckin needle and that crack and the crystal meth that I only learned about after he died.

I think of Voldemort, the antagonist of J.K. Rowling’s Harry Potter series. According to the story, Voldemort could not feel love because his witch mother, Merope, conceived him when his father (a muggle named Tom Riddle, Sr.) was under the influence of a powerful love potion, Amortentia. The love potion could not create actual love, only infatuation. Merope died in childbirth and in an interview, J.K. Rowling said: “It was a symbolic way of showing that he came from a loveless union–but of course, everything would have changed if Merope had survived.” Once the effects of the potion wore off, Tom Riddle Sr. abandoned both Merope and his son, so when his mother died, Voldemort had to spend his most impressionable years in an orphanage, and later at Hogwarts as a member of the Slytherin house.

Consider the story of Harry together. Harry also had a terrible loveless childhood, and somehow gained strength from the struggle. Harry used that strength in a much different way than Voldemort. He became “the one.” The only one who could destroy Voldemort.

My brother had my mother. She loved him in a co-dependent way that I’m still picking apart. She took care of him until the end.

So that leads me to the question: if my brother was unmothered, would he have been able to survive his ghosts?

I don’t know. These are all questions I have. They come from the bittersweet realization I’ve had over the journey of writing my memoir, A Dim Capacity for Wings — I would not be who I am, would not have accomplished all that I have and continue to, had I been mothered.

Ain’t that a bitch?

I still want to know… What happened to you, Superman? Why? Why did you not see yourself worthy of love when you had so much of it in your life? Why couldn’t you overcome that ghost? And why do I continue to work tirelessly to overcome mine?

It was my brother’s death that made me decide to do the work to heal.

I can pinpoint the moment I decided to live. Because, yes, that’s what it became. I had to decide to live. I was in that darkness of grief that I knew could take me out. That almost did.

I walked into my daughter’s room like I have and still do every night since she was born. I looked at this beautiful little girl who formed in my womb, and thought, “I can’t leave her. She needs me.”

And so, I took a chair and sat in my grief and all those griefs this grief uncovered, especially the grief over my relationship with my mother, the fact that she can’t and won’t mother me. And she probably never will.

Why couldn’t he do that? Why, carajo, why?

I have so many questions. Some of them I’ll never be able to answer, but this I do know — this work I do is how I bring my brother along with me. I love him. I miss him. I carry him. Always. 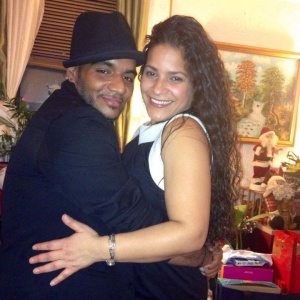