I’m in Miami for the 17th annual VONA/Voices Writing Workshops for writers of color. It’s my eighth consecutive VONA. The first five I attended as a student and worked with some of the best writers of our day. I was at VONA in 2013 when my brother died. After that I knew I couldn’t return as a student. I was invited the following year to return as staff.

Every year something happens that makes me acutely aware of the sacred ground this is. This year it was the Orlando Massacre. I haven’t been able to write much since I woke up that morning of June 13th. I cried and sat in stunned silence. Writing felt inadequate and useless.

I’m a processor. Things happen and my body and heart need time to take things in. I couldn’t sleep Monday night. I kept seeing their faces, hearing their names and their stories. 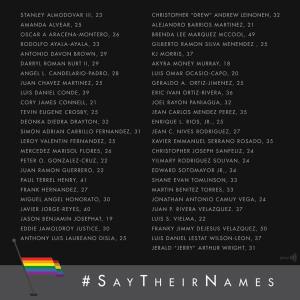 Brenda Lee Marquez McCool, the mother who was out to dance with her gay son, Isaiah Henderson, proud and accepting of him; she gave her life to protect him from those bullets.

Anthony Luis Laureano Disla, the 25-year-old who left university in Puerto Rico just a few credits short of graduating to pursue his dream of becoming a dancer and choreographer.

Kimberly “KJ” Morris, the bouncer who I met last year at the 40th and last Michigan Women’s Music Festival; the same place I met my love, Katia.

I think of my brother who died unable to talk to our mother about his sexuality. He told me once, “mom still asks me when I’m gonna meet a nice girl and settle down.” He rolled his eyes hard and pursed his lips in that “as if” way of his. He’d been out for more than twenty years by then.

I think of my second mom Millie, the self-proclaimed butch, who died terrified of going to hell because that’s what had been ingrained in her by the Pentecostal church whose roots in the campos of her hometown of Lares, Puerto Rico were as deep as those of the wild mango trees.

I think of my own mother who was in a lesbian relationship for twenty some odd years and is now a Jehovah’s Witness who is ashamed of her past and of me—her queer daughter.

I think of that cruel text she sent me when she found out about my love, and how that shattered me so bad and so hard, I reeled into a months-long depression that manifested in exacerbated asthma.

I think of all those nights I spent at the gay clubs in NYC—Krash and Escuelita and Crowbar and Henrietta’s and gay night at The Tunnel and Expo and China Club and so many. Shit, just the other day I was at Bum-Bum Bar on Roosevelt Avenue for Queens Pride.

I think of what it’s like to exist in this queer body and what it was like as the daughter of lesbians in 1970s and 80s Bushwick, Brooklyn. I saw the ugliness of homophobia early on. I once punched a girl in the face for saying, “You’re dirty like your lesbian moms,” all because the boy she liked like me. I dared her to say it again. She didn’t. She knew better. But that’s just one story. There are so many…

When I couldn’t sleep on Monday night, I watched my love sleep and kissed my daughter softly on her forehead. I thought about this family we’re building and how there are people out there who want to destroy it. I grew enraged and terrified and sad at once. I cried quietly into my hands and I prayed. I want to believe that we can be better, that we can be safe and loving and supportive and all those things the prophets said we should aim to be, but I felt helpless and defeated. I felt fuckin sad…

Just as I finished this reflection, I stepped off the bus on my way to a final celebration for my twelfth grade students. A young man came up behind and said, “Miss, you dropped your wallet.” He smiled and handed it to me. He’d pulled his car over on 5th Avenue to retrieve the wallet from the middle of the street to bring it to me. I know this was the universe reminding me to have faith. I was in tears.

I couldn’t make it to all the vigils around the city because I was teaching. I had my last class with my juniors who are working on their personal statements for the college applications they’ll be completing this fall. As I met with a young queer student who is questioning both her gender and sexuality, I realized that I was exactly where I needed to be. We spoke about the horror of what happened in Orlando and she confessed to being frightened of coming out, “but I can’t hold that shit in,” she confided. I put my hand on hers and told her that I get it. I shared that I too am queer and worried about my partner and our community. I told her about how vigilant I was on Sunday as we walked through our neighborhood and sat in the park at the Drums on the Hudson Native American Festival. I told her about all the gay clubs I’ve patronized in just about every state I’ve been to including Florida. “That easily could have been me or my brother or…” She sighed and asked, “How do you do it?” I shrugged. “Little by little, day by day. I can’t let hate stop me from living my life, you know. That’s no way to live, but this shit is hard, I won’t lie to you.” She nodded and hugged me as she walked out. We do what we can where we are…

That night I told Katia about the exchange with my student. I was talking about how vigilant I was on Sunday, hours after the news broke. Katia talked about how she goes on with her life. She said something about how she’s not always aware. I reminded her about what happened when we met up in Ohio on our ride back to NY from MichFest last August. She stopped me from kissing her in the parking lot of a restaurant. She looked around, eyebrows up, watching. “We shouldn’t do that here,” she said.

Before Katia and I walked out of the restaurant, my friend Nívea reminded me, “We’re not on the land, Vanessa.”

There’s no doubt my femme presentation provides me some privilege and safety. I wrote about it a few weeks ago and submitted the essay, An Education on Love Between Womyn, for the Sinister Wisdom’s MichFest Edition. Because of hetero-normative assumptions, it is assumed that am “straight.” I’m not. I’m queer and in a relationship with a woman. I knew this when I went to gay clubs in the 90s like Krash and Escuelita and Crowbar in my 20s. Just the other day I was at Bum Bum Room in Queens and a few months ago I was at Henrietta’s in the Village. For a while I served as the editor of Krash’s Twist Magazine. I penned the pages long exposé on the famous drag queen Jessica Foxx. I made a home at gay clubs when I was a young writer still exploring my queerness.

I went to many gay clubs with my brother back then. We jumped and danced and drank and smoked. I drooled at the go go dancers, both boys and the girls, and laughed and hissed at all the shade the drag queens threw in their shows.

I never felt out of place or unwanted or weird. I felt safe, a cliché—overused word but still true.

At Krash, I interviewed the drag queens in their dressing rooms as they poured themselves into their layers of sequins and latex and tulle, while they slabbed layers of makeup on their faces, glued on inch-long fake eyelashes and penciled in their arched eyebrows.

Krash was NY’s Pulse in that era. That could have been me…my brother…the self-proclaimed butch who raised me.

I emceed a three hour open mic last night in the VONA lounge. I wasn’t going to read anything but as I looked through my phone, I saw “Millie’s Girl” and my breath got caught in my throat. I knew I had to read it. I started by acknowledging the massacre and the memorial that was set up in a corner of the room. Then I started reading… It didn’t take long for the tears to come…

Mom and Millie were vicious to eachother when they argued. They hurled hate like daggers. But when mom took out her uzi and called Millie a maricona, Millie shrank into herself. Her bottom lip trembled. Her eyes got watery. And, she’d pound her chest and yell, “¡Yo no soy maricona, coño! ¡Yo soy butch!” Her voice would crack and she’d cry. “Yo soy butch.” Over and over. Like she was trying to convince herself. Then she wiped her face roughly with the front of her orange t-shirt, grabbed her keys and she was out. “Me voy pa’l carajo.”

What must have been going through her mind? What was it like for her to grow up a lesbian in Lares in the 50s and 60s where the Pentecostal church is as deeply rooted as the wild mango trees? Is that why you left your querida isla, Millie?

34 writers read. They shared stories and poems about their lives, their homes, lost love, encounters with racism and white supremacy, the times they’ve been made to feel small and how they took back their power. We cried. We laughed. We celebrated one another. Then we went to howl at the full moon on the night of the summer solstice and I felt my faith in humanity come back. Yes, there are heinous people out there in the world who want to destroy us, who don’t see or can’t handle our kind of beautiful. Last night I didn’t give a fuck about them. Last night I remembered love.