A Different Kind of Holy

Things happen when you’re writing memoir. When you make the conscious decision, put deliberate effort, into digging into your past.

You never expect it. And you’re always bowled over. Always.

For me it started in February when I stumbled upon a picture of myself at the age of seven, playing in front of the building I grew up in. 383 Palmetto Street. It was 1983. 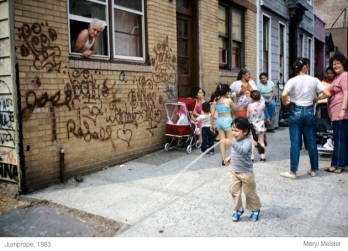 My eyes were drawn to two people. My Mom, who’s sitting on the trash cans. She’s still swollen from the Stage 4 cervical cancer that she somehow survived without needing chemo or radiation therapy.

Then there’s him. The old man in the window. Valentín. He’s staring directly at the camera. Ese desgraciado.

If I’d come across that image just a few years before, it might have broken me. But it didn’t because I’d already written the story of being molested. White Straw Climbs. I’d only just started talking openly about it.

The picture made me stare at the healing I’d done in the writing. In the reliving.

That was just the beginning of the holies. There have been so many.

December 5th, 2012. Four days shy of my 37th birthday. I was walking with Meryl Meisler, the photographer who took that picture of me at seven. The one I did a collaborative photo-narrative exhibit with for Bushwick Open Studios, Defying Devastation: Bushwick in the 80s. The exhibit that appeared in the New York Times.

The exhibition there, “Defying Devastation: Bushwick in the 1980s,” is the joint work of the writer Vanessa Mártir, who was born in the neighborhood, and the photographer Meryl Meisler, who taught in its public schools and took pictures of its residents, the young Ms. Martir among them.

Together they tell the story of Bushwick long before the art wave got there, when, shattered by poverty, racism and civic neglect, it was seen by many as a ruin that would never rise. Now it’s rising, and art is helping it, just as it is helping art by giving its makers a place to go. Ideally such synergy would hold; it can’t, because it never does. Still it’s hard not to feel a tug of hope under those big, open Bushwick skies.

Meryl and I met up to take shots of me reminiscing about the neighborhood. We went into the library. The Washington Irving Branch I went to as a child. Where the RIF (Reading is Fundamental) librarian noticed me and started saving a book for me every week. Ordering titles just for me since I’d gone through the ones stacked on the shelves.

Then we walked down Palmetto Street and talked about the how the block looked back then. The lots of rubble and trash. The dilapidated and burnt out buildings that became crack houses. The steeple of the Lutheran church that was my beacon when I was a kid and in many ways still is. I know I’m home when I see it in the distance.

She asked if she could take a pic of me in front of my building. 383 Palmetto Street. I shrugged, “Sure.” We started walking in that direction.

You’ll probably run into mom. I thought about what I would say. How she would react. My insides ached. Mom hasn’t spoken to me in a year.

Then I saw her. She was on the phone, and though she was too far from me to hear her conversation, I knew by her expression, the way she was talking with her hands, how her eyes were darting around, that she was having a heated conversation, either telling someone off or talking about someone’s sinvergüenzería.

I kept walking. I wasn’t sure what to do. Mom is so unpredictable. What if she embarrasses you in front of Meryl? What if she rejects you? I couldn’t handle either.

I leaned toward Meryl, “That’s my mom.” I kept my back to her. Then something said stop. Turn around. I listened.

I’m all in the next stage of my memoir. Like all in. I carry the twenty pound folder of all things memoir everywhere I go. It’s next to me when I sleep. The stories sit on my belly. Wake me up between 3 and 4am to write.

I use every free moment to edit and write and sit with it. I write on the train, hunched over my journal. In the library while Vasia is in dance class. I print out what I’ve reworked and edit while I’m commuting to teaching gigs. While waiting for my students to arrive.

I just started reworking the third chapter of the book. Her story. Mom’s.

I heard mom’s story in fragments and out of sequence, like terrible secrets are revealed. In arguments, when accusations are hurled like bullets, meant to cut jugular and make blood spew. Hot like magma, burning everything it touches.

I see myself, four, six years old, playing with dolls behind couches. I smell the crisp boil of white rice and the heavy with cilantro habichuelas stewing on the stovetop. The chicken is baking in the oven, seasoned the night before so you can taste the sofrito in the marrow. Millie always closed her eyes when she ate mom’s chicken. When she was done eating, her plate looked like a graveyard of splintered bones.

In another scene, I have the Atari control in my hand, the TV volume is on low, Pacman is running across the screen. The ghosts are close behind. Chasing.

I hear the dominos clanking and the ting of Budweiser latitas against teeth. The conversaciones de los adultos travel to my ears.

Then the laughter becomes screams. Choked yells dripping with vergüenza. People are so vile when they’re angry.

I didn’t really understand what I was hearing. I can’t even say when “then” was, but I knew. I knew something terrible happened to mom and she never got over it. When she beat me until I was a shivering ball on the floor. When she raged and cried until the doñas came to pray over her and rub her with alcolado while she sat naked and rocking herself like a supplicant in the tub, the beads of the rosary clinking to the rhythm of the prayers.

It’s taken me more than three decades to piece it together. How I imagine it.

All along, while writing this memoir this year, I’ve been mourning my relationship with my mother. It’s nonexistence. I’ve worried. What if something happens to mom and we never talk again? The thought has kept me up many nights.

She didn’t notice me right away. She was too busy arguing. Then our eyes met and she flinched visibly. “Espérate Milagros que me encontré con Vanessa.” She squeezed her eyes like she does when she doesn’t want to cry and hugged me. Hugged me tight. Then she smoothed the back of her hand over my cheek and stared. A small gesture. So tender. My insides caved in.

She smiled. A smile full of relief and sadness.

We walked together. She chimed in on how different the neighborhood was back then. “It’s not that clean yet,” she said as we stepped over a pile of trash on Palmetto Street. “But it’s better.” Mom still has an accent though it’s not as thick as it once was. She didn’t learn the language until she arrived from Honduras when she was 16.

I asked questions. “What age were you when grandma left?” “How long was she gone?”

Grandma left when mom was 10. She didn’t see her mother again until she was 15. I thought about how pivotal those years are for a girl. How lost I felt not having my mom around when I left to boarding school at 13.

I learned grandma left to Puerto Rico with a Turkish family she was working for. Mom smiled as she shared. Her eyes were far away. She was in Honduras.

“¿Quieren entrar?” She held the door open for us. I haven’t been in that apartment, her home, where I grew up, in over a year.

I tried to hide my excitement but I know my face brightened. I’m like my mother. Fuck the sleeve. We wear our emotions on our faces. Boom for the world to see.

As soon as we stepped in, I was transported to my childhood. Mom has plants stacked all over. Perched at the tops of cabinets and on the window gates. On the table in the living room. Hanging from the ceiling.

There are still pictures all around in the living room though they’re different from the ones that hung on the walls in my childhood. I breathed deep when I saw the collage I gave her of me and Vasia, up high on the book shelf. Prominently positioned. And the large pic of me when I graduated high school. Mom keeps me close in her way.

She showed Meryl pics of me as a kid. One she had sitting by the collage. Meryl smiled.

I stared at the picture. I was just a year old. Just a few months before mom had been told I wasn’t going to survive. I see my fire. My mischief. My, fuck that, Imma live.

“Vanessa wasn’t easy.” Mom looked at me and smiled. Her brows were arched in that “you know you weren’t” way. I laughed with her.

“I was the kind of kid who always asked why, and when mom said, ‘Cause I said so,’ I said, ‘But that doesn’t answer the question.’”

We were both difficult. Mom was fiercely controlling. I was fiercely independent. It’s why we clashed. Why we still do.

“Vanessa was always big. Even when she was little she was big.” She handed us a photo album and looked over my shoulder. “I don’t like that picture,” she said.

I felt her shame. She bit back the bile and scurried to the kitchen. I could tell she was nervous. Not uncomfortable nervous, but nervous. She too had a hard time with the distance. I see that now.

Mom had to go back to work. “Stay here. Just pull the door when you leave.” I hugged her tight.

I don’t believe in coincidence. I know the universe leaned in the holy yesterday. I don’t know what tomorrow will bring. Mom is so unpredictable she can just as easily send me a fuck you text tomorrow. What I do know is that the universe sent me my mother yesterday. While I’m writing about her. I saw her humanity. Her pain. How she copes. I felt her love. If that ain’t holy, I don’t know what is.